To reach the final, Jeannie battled through the qualifying rounds, and the quarter and semi finals.

Her opponent in the final was Moises Bejarano Caracuel. In a hard match, up against a physically stronger opponent, Jeannie finally managed a win in the second set tie-break.

Jeannie with her proud father and tennis coach, Orlando Barcia.

To become a professional tennis player requires dedication, expert coaching and playing in as many tournaments as possible. By gradually increasing your ranking you can enter more challenging tournaments, gain experience and build up your skills. Jeannie has been coached by her father Orlando Barcia since she was a young child, her current ladies ranking in the Royal Spanish Tennis Federation (at December 31, 2019) is 981.

On December 27, 28 and 29, the Don Carlos Hotel Tennis Club in Marbella celebrated the traditional Supercup tournament with the participation of players from all categories.

Up against players with a much higher ranking Jeannie Barcia (ranked 1025) really showed how her game is improving. In a crucial semi-final match she overcame Lara Santana (ranked 419) 6-4 6-4.

Jeannie went on to win the final against Carmen Pérez 6-4 6-1 (ranked 847), to become the Supercup champion in the Female Child category.

Need a racket stringer urgently? I provide a fast, reliable professional stringing service for all racket types, but particularly tennis. I offer a very flexible service, I can pick up and deliver in the Marbella area or you can drop off and pick up at your convenience.

Using my extensive knowledge gained over many years as a player and coach, I can give advice on rackets requirements and string specification for different level of players, from beginner (including children), intermediate, advanced and competition level. This specialist stringing service will help you play like a pro.

Prices are from 25 Euros including a standard level string.

If you are looking for a new racket I can also give advice and offer discounted prices for new model Babolat rackets including accessories.

This weekend Jeannie Barcia became the champion at the XXII Circuit de Tenis Costa Del Sol 4th tournament which was held at the Riviera Sport Club in Marbella. The tournament was for players aged 14 and under.

Jeannie, seeded number 1, progressed through the opening rounds to reach the final against the number 2 seed Laura Mañas.

The final was a very hard fought match lasting 2 hours and 15 minutes. Both players have excellent forehands, Laura’s forehand is very hard hitting and Jeannie’s forehand and backhand drive are both very consistent. Jeannie pushed hard from the centre and baseline, there were many passing shots but Laura defended very well. It was a very exiting match right to the finish.

We are delighted to report that Jeanie Barcia was selected by the Andalucian Tennis Federation to be one of the players to represent Andalucia in the 14 years and under age group. Jeannie took part in a three day intensive evaluation in Seville, where the Federation staff coaches monitored the skills and abilities of the candidates. On the 30th December Jeannie was presented with a diploma confirming her selection.

Jeannies coach and Father, Orlando Barcia, said “In future regional tournaments Jeannie will now represent Andalucia in her age group. She was told by the federation coaches that she would make a first‑class tennis player if she can continue her career. Unfortunately, there is no sponsorship with this opportunity, but we will continue to try and realise her dream for as long as we can“. 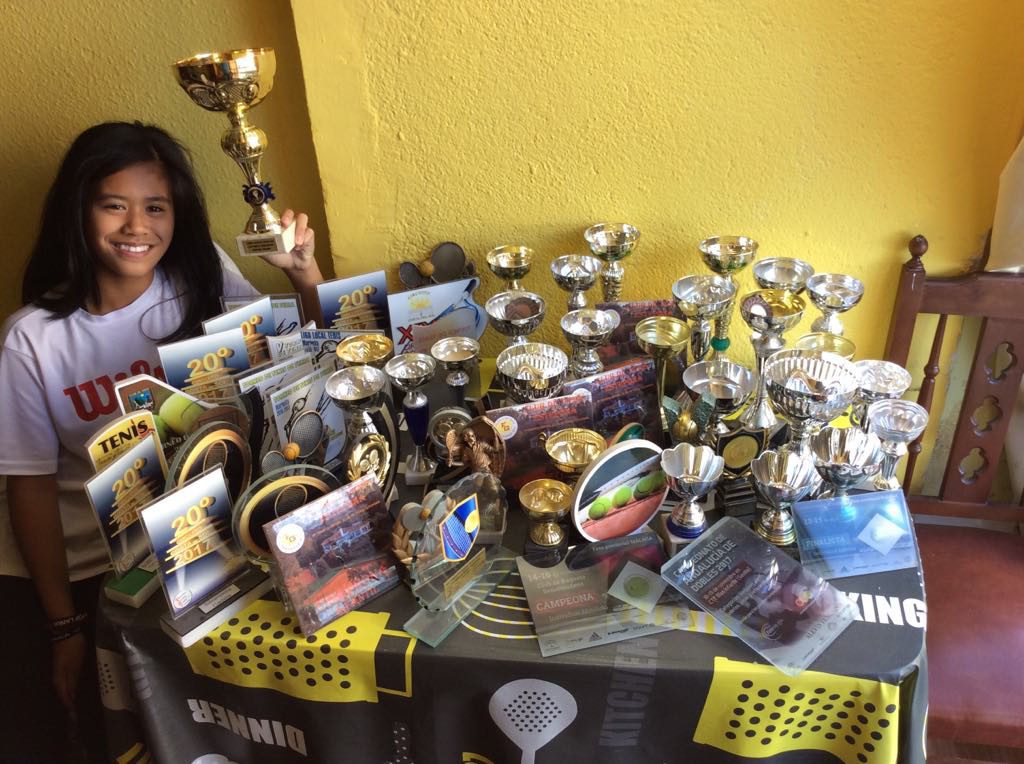 Thirteen year old Jeannie Barcia added yet another trophy to her growing collection.

Last weekend she battled through to become runner up in the XV TORNEO FEDERADO CLUB DE TENIS PUENTE ROMANO. This federated tournament counts towards the rankings on a regional and national level for all participants by age category. Jeannie was competing in the 14 years and under category.

In the semi-final match Jeannie was up against Semona Alter, a tough competitor. Semona is physically very strong with a good serve, she plays well from the baseline and her forehand and backhand strokes are consistently good. The match was scheduled for 20.00 pm and watching the warm-up one could see that it would be a tough match.

The first game of the first set was very long and was finally won by Simona. However, Jeannie remained calm and took the next game to level the score at 1-1. From then on the match was played like professional players, every point was fought hard with many strong cross-court exchanges and down the line winners. Jeannie finally took the first set 6-3.

The second set was even more strongly contested. Every point was a struggle but Jeannie’s big forehand drive started to come into play. If Jeannie received the ball in the centre of the court her forehand was very solid. The intense and exciting atmosphere of the match drew a large crowd with many players and trainers watching the game. Jeannie finally won 6-3 6-4 in a match that lasted two and a half hours. 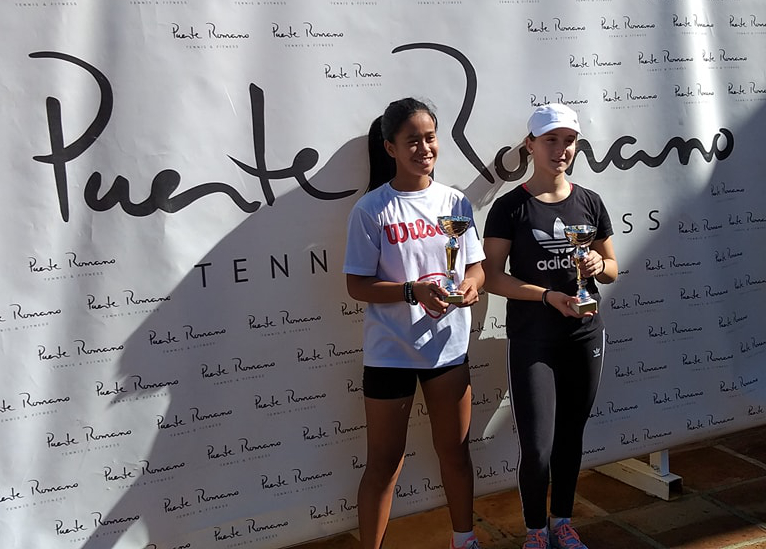 The next day the final took place at 10.00 am, Jeannie’s competitor was the other semi-final winner Telma Lorenzo. Jeannie lost the final 2-6 3-6. The match was very different to the semi-final with some line-call disputes and Jeannie didn’t settle and made too many unforced errors.

These two matches were very different and are an example of different ways of winning and losing. They provided a great experience for young players like Jeannie to develop their game.

If would would like to help Jeannie on her way to becoming a professional tennis player then please go to support-jeannie.com 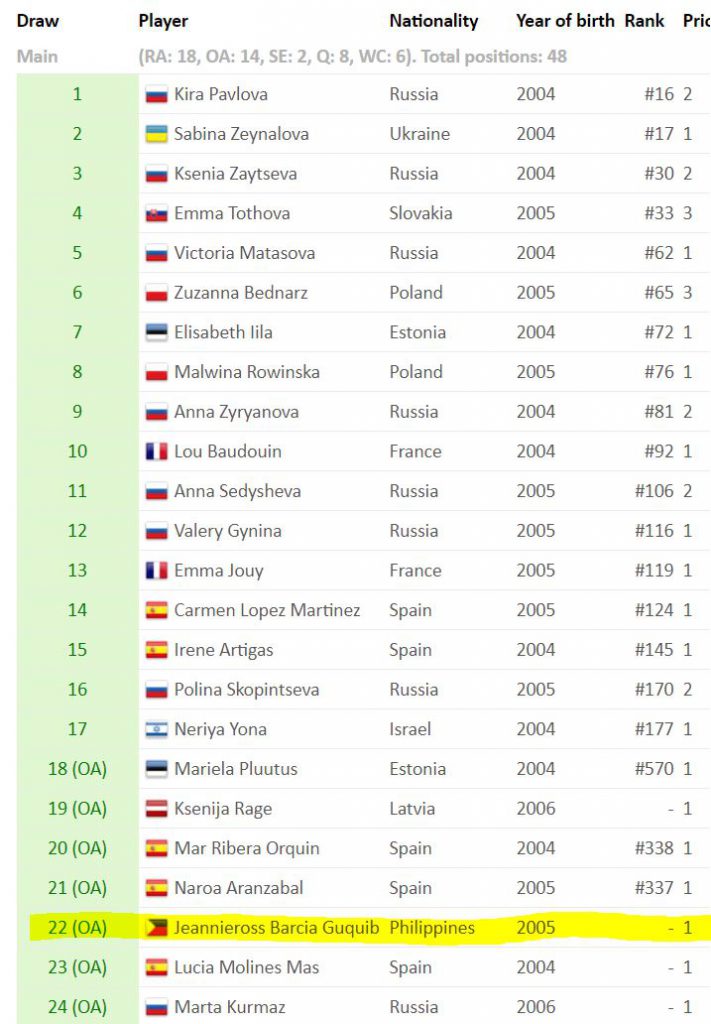 A fund raising campaign has been launched to help Jeannie Barcia reach her goal of becoming a professional tennis player. Almost every week, Jeannie has to travel and compete in tournaments across Spain against players with far more finacial resources.  Without competing in tournaments it is not possible for Jeannie to gain points to increase her ranking. You can find out Jeannies latest ranking in Spain by clicking here.

How can I help Jeannie?

If you would like to help Jeannie then please go to the Jeannie Barcia donations page:

In order to spread the word, a number of postcards have been produced in English, Filipino and Spanish. A postcard will be sent to anyone who helps Jeannie with a donation.

On Saturday the 19th May 2018, Jeannie took part in the Malaga ladies open tournament, Jeannie was in a very exciting quarter final match on Saturday. Her opponent was Anaïs Peralta Criado. Anaïs is three years older than Jeannie and ranked 231 in Spain. It was a very close match lasting almost 3 hours, Jeannie (ranked 631) won the first set 6-3 but her opponent fought back and won the second set 1-6. After a close third set Anaïs  won 3-6, but it was a good display from Jeannie who attacked all the way through, only narrowly losing because of a few mistakes. It was an excellent performance from Jeannie and very good experience. the final score 6:3,1:6,3:6,

Here is a solid forehand from Jeannie during the match: